Oh Best of all my Beloveds, let me tell you a story… Dusty dirt lay there masquerading as the earth; tiny particles that didn’t move of their own accord. They endured being walked over or pushed around by humans and animals alike. Never complaining, only waiting.
One day it happened, as it inevitably does, and the sky above the little dusty particles turned gray and heavy. A slight wind begin to breeze over the tops of the dusty mites, igniting tiny sighs of excitement and anticipation that no one but themselves could hear. The wind turned into a whip and suddenly a fat wet drop of water thunked into the midst of the tiny dusty dirt particles. If a human had been listening closely enough they might have heard the tiny sighs turn into tiny shouts of uninhibited joy. 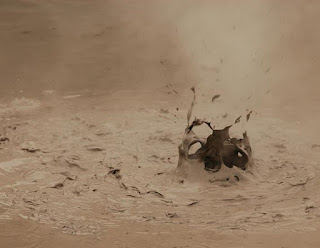 Another juicy drop crashed into the crowded earth, then another and another.  The individual drops became so numerous that they crawled toward one another and merged into puddles. The puddles shuddered and sank and mixed down deep into the myriad little dusty dirt bits, melding thousands upon thousands of them all together all at once.
Soon the hurtling rain pounded the earth so hard it threw up the particles into the air, soaking them. Even sooner the mixing turning dancing particles and raindrops formed into little beasties who proceeded to laugh out loud in unencumbered mirth. Their little arms and legs and heads and torsos and tendrils and hair and whatever else they happened to produce, in the amazing mixture of water and dirt, twirled and danced and hopped and ran all over. They ran to avoid the greater puddles developing, longing to stay small in their own little bodies, joyous in having freedom to move of their own accord.
Thousands and thousands and thousands formed, danced, laughed, hugged, played, hopped, screamed in delight, living so completely they had no room for doubt, time or the future. No one cared about anything but joy and freedom and love and happiness.
The rain from the high sky above them continued to pour down harder and harder. A tempest grew. The little muddy creatures danced harder and harder as if daring the sky to stop them.
And it did. Too soon for the little dancing muddy beings the puddles melded into lakes and rivers and streams which ran faster and overcame the tiny creatures. They melted, swooning into the great body of liquid, dispersing as the flowing water swooshed them all away to new places where they would eventually dry out and lay in wait again, for the next rain drop to fall.

Inspired by an idea from my son Tristan about the word 'Mud.' He thinks I should turn it into a children's story. What do you think? Thank you dear beloved Rudyard Kipling for the entry. It felt like a story he might have written had he thought of it. Photo from cringel.com.
Posted by Lisa at 5:29 PM