The Jabberwocky poked, his head round the tree,
Afraid of what he might, or might, not see.

He sighed and blinked, when he found nothing there,
Safe for now, he thought, and frowned with a glare.

He took a step from behind his tree,
And stopped aghast, that he now could not flee.

A monstrous apparition began to appear,
Freezing his feet, with a strange queer fear.

The Jabberwocky’s eyes met those of the monstrosity,
And he breathed hot blue fire, with a great generosity.

Intoxicating nectar flowed in his veins,
No! He would not surrender.  There would be no chains!

He breathed deeper; his blue blaze against her green,
She would not be the reaper; he would be her king!

Bright colors cascaded, on their hard, crusty hides,
Nothing could compete, with their shimmering tides.

Her eyes started spinning; his were out of control,
As they delved full flight, into each other’s souls.

They raised grotesque heads to the sky, fires spouting,
And roared the cry, of their mutual “outing”.

The fires sank back down, to soft binding earth,
Leaving both aware, they had just given birth.

He grinned at her, she sparkled at him.
“Gottcha,” she whispered, her smile all a brim.

“Who got who, I wonder, I cry.”
Was his response, with a wink and sly sigh. 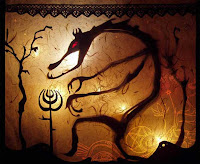 Image from:
http://goaskaliceoracle.blogspot.com/2011/01/jabberwocky-beware-jabberwock-my-son.html
Posted by Lisa at 1:26 PM