There are many ways to manage a project, a book, a person. What about how a protagonist manages his/her writer? I think this is a good question for a writer to ask his/herself.  When I started this novel I heard two people, the assassin and the writer. I didn’t hear the detective very well. Now, having lived with all three for—I’m not telling you how long—I realize that though I heard their voices, I didn’t manage what they told me very well in the beginning. I wrote what I wanted them to do/think/say/feel. To a point I still do. Like a movie based on a true story. Managing means you take the basic elements and craft them into something unforgettable without forgetting the protag’s input.

Example: The Changling” with Angelina Joli. The true story is horrific enough, yet they managed audience empathy by turning a child into an unwilling accomplice to murder, which was more interesting than it being the villain’s mother, which was too cliché even though it was true. “Braveheart” did the same thing with William Wallace. The princess in the movie was actually eleven years old when she married the prince and never met William Wallace. But revenging William’s death with the king by giving him William’s child as an heir was much more interesting.
First draft of Celia’s reaction to the knife/stranger:
A deep, painful abiding fear of knives overrode her survival instinct, her rational thought. She wanted only to melt into the sidewalk but, as if they were lovers, the stranger held her so close she couldn’t resist. The thin plastic handles of her leaden bags burning into her gloved hands started to slip from her numbing fingers.
“Don’t drop your bags.”
She fought to get a better grip. “I, I--” 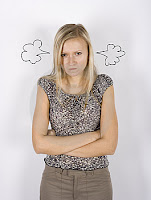 “Walk with me and smile. Now.”
Celia’s heart flip-flopped into full pounding but she did what he ordered. Because of the knife. She started to sweat.

After Celia stomped her foot and said, “Listen to me, I’m no wimp!” we revised:

She felt a body bump into her from behind but her bags tangled against her legs and she couldn’t move any faster. Before she could react, someone grabbed her, spun her around and put an arm around her, shoving her face into the middle of his chest before she could see his face.
Celia reacted instantly, pushed back against him with her elbows, protest on her lips. But before one word escaped, before her heart-beat aligned with her escalating panic, the stranger slipped his other hand beneath her open coat and pressed a sharp point against her back ribs. A knife. She knew immediately, with a loathsome intimacy, the feel of a knife and what damage it could do. She whispered her prayer, “Not again! Please God—” Then a bomb went off inside her head and she started to scream.
©2011

She had more guts than I’d given her credit for. The “meat” of the story is unchanged, but how I "managed" to get it across paints a very different picture of Celia.

www.fanpop.com
ovesujeiry.com
Posted by Lisa at 12:30 AM

Email ThisBlogThis!Share to TwitterShare to FacebookShare to Pinterest
Labels: a to z blogging, Angelina Joli, Braveheart, The Changling, The Seventh Man, William Wallace