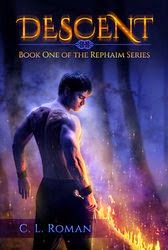 Escaping a global catastrophe, angel-human hybrid, Shahara, lands safely in Babylon with her beloved Volot, an angel with a sacred mission. But the victory is a hollow one, for the world she knew has been obliterated. Battered by the loss of her family and the denial of her most cherished dreams, Shahara’s new life begins to disintegrate as she is lured by promises of power and fulfillment into the violent, blood-soaked ambitions of a ruthless enemy. With her marriage shattered and countless lives hanging in the balance, Shahara must make a devastating choice. Can she survive her decision, or will victory require the ultimate sacrifice? By turns romantic, suspenseful and terrifying, this epic fantasy treads the knife edge of human frailty and superhuman courage.

Volot leaned over and kissed her, his lips a promise against hers. He was still watching her as he backed into the front garden and leapt, his wings springing free of the pattern on his back, lifting him into the sky.
Shahara followed him out the door and watched his progress, up through wide-spreading tree branches, to open air. In the distance a thin, gray tracing smudged the horizon like smoke. Shahara shivered in the cold breeze that kicked along the foundation of the house. Hugging her shawl close about her, she went inside to begin the morning’s work. Preparations needed to be made, Danae said, if they were to have any chance of surviving the thing she called a flood. Shahara shook her head as she worked. Sabaoth may have given Danae the gift of prophecy, but her prediction made no sense. Water was to cover the entire Earth? For a year? Impossible. Still, it was better to be busy.
Immersing herself in the work helped to push the pain of loss once more into the distance. It also served to diminish her awareness of her surroundings. The morning was half gone before she realized how dark it had become. Wrapping a strap across the basket she had just filled, Shahara stood and stretched her tired back. Outside, the wind moaned like a living thing and she crossed to the doorway, looking out with dull eyes. The smudge she had noticed earlier had grown into a skein of dark, heavy gauze, covering the sky from horizon to horizon. She stared at it. The wind died and the world stopped in silence. For an instant her vision sharpened and she noted every leaf, every flower and stone within her sight, as if it had been magically painted across her mind’s eye by an iridescent brush; a scene she would be able to recall with instant, awful clarity for the rest of her life. Then, with an ear-splitting roar, the earth rocked beneath her. An ancient oak swayed like a sapling and crevasses ripped across the ground as water poured from the sky in torrents.
“Volot,” Shahara screamed, calling to him with voice and soul. In a blurred rush, Volot scooped her up and vaulted into the sky as the oak fell, crushing their house beneath its colossal branches.
Shahara clung to him as he fought to stay airborne against the furious wind. For an instant, the couple looked over the sudden ruin of their home.
“It’s too soon! We’re not ready.” Shahara shouted her protest over the storm.
Volot shook his head. “We were not promised time. We only hoped.”
“What about the others?”
Their eyes met and she saw the torment in his glance. “We will have to find them after. They will escape the same way we will. Shahara…” he hesitated and lightning streaked across the sky above him, thunder cracking in the same instant. “We have to go into the Shift.”
She stared at him with wide, terrified eyes. “No. We’ll die there.”
“We’ll die here. There is no choice.”
He didn’t wait for a reply but thrust hard with his wings. In a shower of sparks, the pair was gone, leaving chaos to reign behind.
Stepping into the dark in between, the pair shivered in the sudden, intense cold. The rain-wet fabric of Shahara’s dress stiffened and ice crystals formed in her hair. In the distance, she could see pin-pricks of silver light and she shuddered.
“We have a few moments before they get here,” Volot said.
“Before what get here?”
“The lights.” He glanced over his shoulder but she could see no difference yet.
“And then what?” she asked, her teeth tapping together in the jaw tightening cold.
“I don’t —” Volot’s reply was cut off by a brilliant spray of gold sparks as another angel entered the Shift.
“Well met, Volot. I see you have brought your wife along.” The voice echoed hollow and distant in the cold, but the speaker glowed in sharp relief against the dark. Shahara glanced from Volot to the newcomer. He could only be another angel. His topaz eyes gleamed clear and intelligent beneath black brows. His ebony skin shown reddish bronze in the dim light and it took a moment, but she could see from her husband’s expression that Volot recognized him.
“General Bellator.” Volot snapped to attention and pounded a fist to his heart in salute. He glanced at Shahara. “The situation on Earth is dangerous at the moment. I had to —”
Bellator waved his comments aside. “No need to explain. It is well. You will be taking up a new mission now.” The general glanced over Volot’s shoulder and frowned. “We haven’t much time, so listen carefully. You will travel through the light into a city called Babylon.” 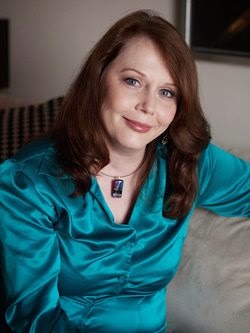 Cheri Roman is a writer, editor, teacher, wife, mother, grandmother and friend, in whatever order works best in the moment. Most days you can find her on her blog, The Brass Rag, or working on the next novel in her fantasy series, Rephaim. Cheri lives with her husband and Jack, the super Chihuahua.

Thanks to our wonderful parade authors we've got fantastic swag baskets for three awesome winners! Prizes include ebooks, gift cards and fun!
Remember, winning is as easy as visiting, clicking or commenting--easy to enter; easy to win!
Click here to enter