Litchgate Tree and other interesting subjects...

I begin this blog with an excerpt from: The Celtic Storm, because I was reminded of the inspiration I’d found from a tree in New Orleans. Seeing the Litchgate Tree brought this back to me.
PROLOGUE     32 A.D.
A small girl with brown honey-touched hair slipped with practiced ease through the shadows of ancient trees and thin underbrush. Her swift bare feet skimmed the dead leaves littering the forest floor, but gave no sound. She ran, knowing the farther she was from the stronghold, the more she could explore without discovery.
The young one halted, hearing a whisper. Had they found her so soon? Nay, it was not a voice she knew. She crept forward, slowly, following the whisper as it grew louder, stronger. Confused, she halted again. The birds still sang, small animals still minded their stomachs, untroubled by her or anyone else. Then she realized the whisper was in her head, not in her ears. What god or spirit teased her thus? She shivered and glanced about. There was no one there.
Ahead of her the light brightened as the trees thinned, and she entered a huge clearing she had never seen before. The mid-day sun, high in the unusually blue sky, shone bright upon a huge ancient oak standing alone in the clearing. She had never seen one so big. A mass of long thick branches reached toward the sky, creating a large sheltering cover for more branches below. Sprouting from the immense trunk they sloped gracefully to the ground, resting there, as if to give ease to the giant.
A slight breeze blew through her hair as the little one stared in awe at the Tree. The whisper in her head grew insistent, and loud. Her eyes widened in surprise.
“Cartimandua. Little pony, come to me...”
How can it know my name, she wondered, knowing in the instant she saw it that it was the Tree calling to her. She stumbled over her own feet as one tried to reach the Tree before the other. She wanted to touch it, but hesitated. She moved closer and saw an altar tightly embraced within the giant twisted, gnarled roots. A sacred Druid’s altar, so sacred, so old, it was almost lost within the Tree’s suffocating clutch of roots.
She knew then she should return to the stronghold and find Priest Maxen. She should ask him to come back with her. This was a sacred place and she should not be here alone. But she also knew once Priest Maxen learned the tree had spoken to her he would allow her to touch it.
Her feet propelled her forward. The closer she came to it, the more majestic it seemed. Finally, she reached out a quivering hand and grasped the rough, trenched bark of a sweeping branch.
The voice was no longer soft, no longer a whisper.
“Come, sit with me,” it said clearly in her mind, “Climb my limbs and lay your head upon my trunk, here, close to my heart...”
The child scurried up one of the thick sloping branches sweeping the ground and settled into the cradle where it joined the solid trunk. She laid her head upon the moss-covered bark and closed her eyes. The Tree seemed to curl itself around her, hiding her from the eyes and rules of pestering handmaidens and guards. Hiding her from unwanted responsibilities and demanding parents. The little one sighed; a small smile teasing her mouth. The Tree welcomed her home.
Cartimandua, Chosen One of the tuatha Brigantes, hid within the sacred Tree’s haven, claimed, sheltered and strengthened by it. As stormy portents of war gathered over her island home of Ynys Alcam, the little princess had no forewarning of the gods’ decree, for her, or for her sacred Tree. 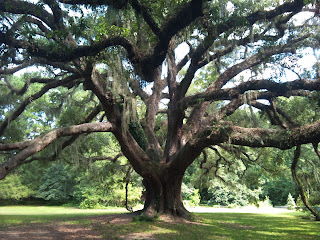 Here is a photo of a great oak, this “Litchgate Oak” that still exists in Tallahassee, FL and under which my parents were married. I visited this oak two days ago with our lovely French Girl Sandra, and once again was given a feeling of wonder, grace, and desire to hear what this great oak might say, could it speak. What stories would it tell of the things it has seen in its long, long life?  I SO wish I could hear its voice. It is, I believe, over 600 to 800 years old. To have survived this long, to still be standing amongst the city growing around it, one can only imagine… Here is the link to the site.  http://www.lichgate.com
There are many, thankfully, great oaks in this ‘neck of the woods’ that still stand tall and silent, guardians of time. Near St. Simon’s Island, near Charleston, SC. I know there are many I haven’t seen. But this one and the one in New Orleans touch me deeply, I can FEEL them and I appreciate them sharing their ‘selves’ with me. I hope they will live on long after I am gone. There was one in Valdosta, GA, but it has passed, living on only in a carved statue of a Viking, for the Lowndes County High School Vikings sports teams. At least we still have that.
Also I posted (on FB) and tweeted a link to a heart story for any of us who have children. I don’t know about you, but when mine were growing up one of my greatest fears was someone snatching them away from me. This man’s quick thinking, this man’s sense of right was so great that he did a wonderful deed. He saved a 6 year old girl from a kidnapping. Check it out at this link: http://news.yahoo.com/father-2-becomes-hero-abducted-girls-rescue-073823983.html
I wish the news had more of this and less of the doomsday blah blah.
Posted by Lisa at 1:39 PM