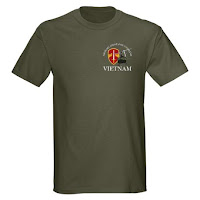 I'd like to share with you something Sue F. Miller wrote and I had the opportunity to read. As my father and step-father are both vets of these wars I felt I had to share. In this way I hope to show my support once again (see blog post "Airports and Service Men 12-19-11) for those who are in military service to our country. So, to the guest post...

I quickly rushed me and my cart to the back of the Ingles grocery store in Black Mountain, North Carolina to ask the meat man a question. After he had given me my answer I headed to the deli side. As I neared the end of the fish section I passed a nicely dressed man, tall medium build, wearing a new khaki-green colored T-shirt. In the logo area I saw the Vietnam Veterans colors. He looked sharp.
As I passed him I remembered when my husband used to wear his cap with the Vietnam colors announcing he was a vet of this war. He stopped wearing it. When I asked why he told me he kept being stopped by other vets, so much so he could hardly go anywhere without being delayed while they shared their stories or asked questions. Where were you stationed? What was your group? What did you do? How long where you there? All of them eager to be a part of others who had shared their job of saving the American dream, because no one else wanted to know or listen. No one else understood what it meant to be a Vietnam Vet. And there were so many of them. 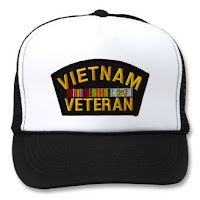 Now this man in the grocery store, by his shirt, told everyone he was a veteran of Vietnam. It quickly occurred to me he wanted to be acknowledged or he would not be wearing this shirt. I turned my cart around and came back to him and said “Welcome home.”
His arms opened wide in surprise. He looked at me, smiled a big smile as he said, “Thank you.”
I do not know what he thought, but I could tell he was grateful someone took the time to tell him this. It was important. This wanting to be seen and honored by the “Welcome home,” very few of our service people got this when they returned from Vietnam. To this day they are still locked into being stranded in Vietnam; the war that never was, the war where they lost their innocence. The war the American politicians said was not a real “war.” Crashing in on me from this one man in a grocery store was the pain from which my husband hid for years. This man in his new Vietnam War T-shirt brought home to me the enormous struggle my husband, and others I’m sure, went through to connect again with family and friends.
I found myself consumed with tears as I left him. Why am I crying? I do not know. As I got close to the deli I found my husband, he saw my tears flowing. I could not stop them. He took me in his arms as I sobbed my story of the T-shirt toting vet to him. He said, “That is how all of us feel.”
My first husband came back emotionally wounded from Korea, that other “war” that wasn’t deemed a “war.” Both of my husbands served in undeclared wars, wars which we did not win. So they were denied honor, medical and emotional help until now. In 2012 they are the older generation of veterans, and they have not forgotten. They know what our young men of today are going through, and what they will have to face when they return from combat. This older generation has a voice now they did not have in the 1950’s, ‘60’s and ‘70’s. They were too young and too wounded, and the worst thing of all, abandoned by their country.
I am still crying as this huge debt still remains unpaid. 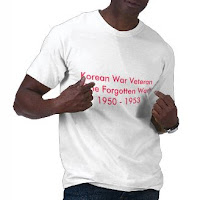