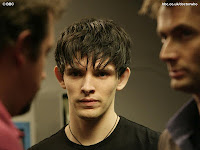 Okay I’m going to post here about something silly but interesting to me because I’m a fan of both Benedict Cumberbatch (Can you believe his name is for real?!) and Colin Morgan. The first is the new “Sherlock” and the later is the new “Merlin.” At first I thought the one was the other though at an earlier age, but no. Not only are they not the same person, they are not related at all, which makes the look-alike’s a bit spooky to me because they are so popular at the same time!

I enjoy both series and watch them on Netflix. I’ve watched all the Sherlock they have so far, and almost all of the Merlin. Seeing these two actors I’ve been surprised not to hear any mention of how similar they look. Not exactly of course, but close enough!
Okay, here are some photos for examples. I look forward to seeing more of these two, and wonder what your opinion is?