Okay, today IS NOT the end of the world, but, I thought I should take care of some old business anyway. Back at the end of October I posted here about clotheslines. We are now in December and my use of my own line has diminished with the cold, but only because unless there is wind with the cold, the clothes don’t dry very fast. This happened last week when I put them out, and not only did it take all day for them to dry, but some I had to take in that night and put in the dryer to finish the job (oh no!). Disappointing, but normal, I guess, for the season. Especially if you live in Santa Fe, New Mexico! 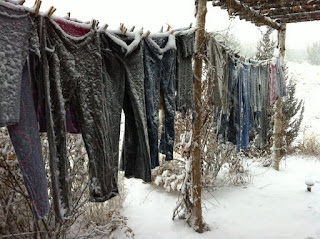 A friend of mine has a daughter who lives there and just the other bright and sunny day, she put their clothes out on the line to dry like I did. Now I have left clothing out overnight a few times and usually within an hour or so of the next day’s morning sun they are dry and ready to wear. Not so, evidently, in Santa Fe. My friend’s daughter left her clothes out overnight just this once, woke up the next morning and voila, snow had fallen during the night. I'm thinking she had to use the dryer too after shaking off all that snow and ice! When I saw her photo after hearing the story, not only did I laugh, but I had to admit I was very glad to live in the south. Same time of year for both clothes lines, and look at the difference! 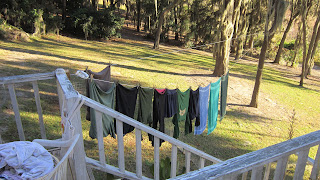 Also, even farther back, in April actually, I posted about Key Lime pie and a follower wrote in saying she wished I’d put up a recipe for it. At that time I didn’t have one, but now I have two!so it follows here. It came from my sister who was a master baker in her own bakery for ten years in Washington State. So, for all you Key Lime Pie lovers, here are two, one that is very easy, and one that is more gourmet-style. Both are delicious and I hope you try and enjoy them both!

Beat yolks til light.  Add milk. Finely zest limes and juice and add together to yolk and milk mixture.  It will thicken as you mix it.  That's good.

Bake 10min at 400*. let cool in refer and top with whip cream
Hope this helps and you like it!  Pie can be made a day ahead.  Put whip cream on the day of eating.

This recipe comes to us from Kierin Baldwin, Head Pastry Chef at The Dutch in New York, New York.

Originally this pie was a conceived as a margarita cream pie, with a spiked layer of whipped cream on top of the custard and a salt garnish, but when I tried it without the cream I realized I liked it a lot more that way. The custard is based on a recipe for key lime pie that I found in a book of pie recipes from Appalachia I bought secondhand a few years ago, but it is not a key lime pie. Regular Persian limes give it a zing that goes perfectly with the sea salt sprinkled on top. I like it best served with coconut sorbet to temper the tang and salt.
Keep reading for the recipe…
Coconut Crumb Crust
½ cup toasted shredded unsweetened coconut
1 cup vanilla cookie crumbs
1 Tablespoon all purpose flour
1 Tablespoon sugar
1 Tbsp sugar in the raw
½ tsp salt
3 Tbsp unsalted butter, melted
3 ounces white chocolate, melted
Preheat the oven to 325oF. Place coconut and crumbs in the bowl of a mixer with the paddle attachment. Add the flour, sugars and salt and mix just to blend. Slowly pour in the melted butter and blend. Spread crumbs in a 9” pie pan and press down to cover the bottom and sides of the pan with a clean edge the same height as the pie pan. Bake until golden brown, about 20-30 minutes. Allow to cool completely and then pour the melted white chocolate into it and first pick up the pie plate and swirl it until it covers the bottom and sides to just below the toop edge of the crust then, using a small rubber spatula, remove any excess chocolate that pools int eh crust, leaving just a thin coating.  Allow the chocolate to reset completely and then it is ready to fill.
Lime Custard
the zest of 2 limes
5 egg yolks
one 14 oz can sweetened condensed milk
1 cup fresh lime juice
¼ teaspoon kosher salt
1 Tablespoon Tequila
1 Tablespoon Cointreau
1 tsp Maldon sea salt (for garnishing)
Preheat the oven to 300o F.
Zest the limes and then chop up very finely with a chef’s knife.
Add to the yolks in an electric mixer bowl and whisk until it is thickened and the yolks have gotten lighter and slightly green, a few minutes.
Whisk in the condensed milk followed by the lime juice, salt and the liquors.
Pour into the crumb crust and bake until set in the center. (It will jiggle slightly like jello, but no longer look liquid when done.) This may take up to an hour and a half depending on the oven, since it is a fairly thick layer of custard. Begin to check it after 45 minutes. (If you have a convection oven, invert another pie plate on top of the one the pie is in so it won’t form a skin.)
When the custard has cooked through, cool to room temperature and then refrigerate until cold before cutting into it. Garnish it with the Maldwon salt just before serving.