How does this scene make you feel?


“Look here. I’m calling security.” With his left hand Hathaway reached for the phone but the intruder stepped forward before he could touch it, grabbed his outstretched hand and slammed it on the desk. “Don’t you recognize me, Hathaway?” One deft thrust and he stabbed downward pinning Hathaway’s hand to the desk with his own letter opener. A smile teased the intruder’s mouth as Hathaway howled in disbelief and pain. 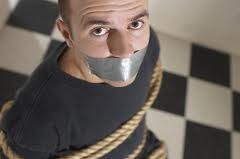 The thin almost wraith-like intruder circled the desk, took the tape from his pocket and wrapped it neatly round Hathaway’s head, covering his mouth in a very real and solid fashion. Silence, then snuffling as Hathaway tried to draw ragged breath through his nose. With his good hand Hathaway automatically tried to pry the tape from his cheeks, but the intruder closed his gloved hand over the letter opener still pinning Hathaway’s hand to the desk and leaned in closer to his face.
The scent of Hathaway’s pain, tangy, almost salty, like blood, lay thick in the air. “Too bad you don’t recognize me," he said, "because I would recognize you no matter how long it’s been. I would recognize you in hell. Take off your clothes.” The intruder yanked the letter opener up and out of Hathaway’s hand. The dull point of it against the underbelly of his chin reinforced the demand. Hathaway complied as fast as his damaged hand allowed. Blood stained everything he touched and the intruder moved back and kept his distance. When Hathaway was naked, the intruder taped Hathaway’s bared arms to the chair; didn’t seem concerned about his legs.

“You should feel lucky, Hathaway. … I’ve buried four of you, alive,” he said, his lip lifted with a hint of a sneer as he leaned over to get personal in the trapped man’s face again. “Sickens me to think you probably didn’t even know they were dead. Quite a nasty way to go, bleeding to death while buried alive, or so I’ve heard. Can’t bury you here though…. How does it feel for you to know what I’m going to do and have no way to stop me?” The intruder seemed to wait only until stark fear begin to burn in Hathaway's eyes. “I will be extra creative with Ryan,” he said, scrutinizing his victim.“Yes. I saved the two of you for last.”
Can you sense Hathaway’s confusion, his fear, his helplessness? I don’t think I’d want to be him, or Ryan for that matter!