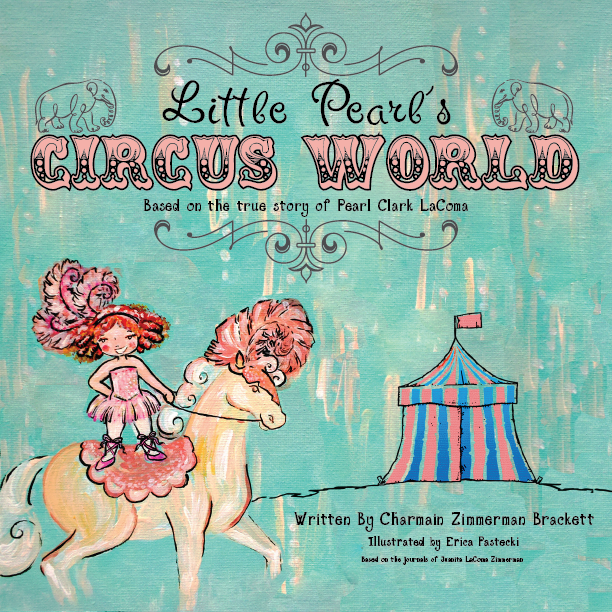 Before she was 5 years-old, Little Pearl Clark was performing in her father's circus, the M.L. Clark and Son's Combined Shows. Join Little Pearl behind the scenes of her circus world. Little Pearl's Circus World is based on the true story of Pearl Clark LaComa (1890-1927).
On Amazon: http://amzn.to/1wcFpGo

Circus in Their Blood
Nature or nurture?
Charmain Zimmerman Brackett's three children have always been involved in dance. Flexible and athletic,  they seem to take to the stage naturally, and they have been given many featured roles in dance and musical theater productions because of their prowess.
As it turns out, it might have been in their genes after all.
"My great-grandmother started performing in her father's circus when she was only 4 years-old. She was billed as a 'contortionist,' and by the time, she was 13, the newspapers called her 'the boneless wonder,'" said Brackett, who has written a book about her great-grandmother called Little Pearl's Circus World. It was published in November 2014.
Pearl Clark LaComa (1890-1927) was the daughter of Mack Loren "M.L." Clark, who owned the M.L. Clark and Son's Combined Shows. Their wagon circus traveled throughout the United States from 1894 until 1945. The family sold the circus after M.L.'s death in 1926.
Pearl started off as contortionist but after marrying her husband, Cris LaComa, she took to the air on a trapeze.
Brackett decided on a circus book because of the notes her grandmother, Juanita LaComa Zimmerman, had kept in spiral notebooks. She had wanted to be a writer and even took newspaper correspondence courses, but Zimmerman's dreams went unfulfilled in her lifetime. It took her granddaughter to bring them to life.
"I added my grandmother's name to the project because the ideas I put on paper were inspired by what she'd written. She had the facts I used to transform the story," Brackett said.
Most of Little Pearls' Circus World is the children's piece with illustrations by Erica Pastecki; however, she wanted readers to know this work was based on a true story so she included a history with some of the family photos she'd collected of Pearl. Ashlee Henry's design brought the whole project together.
"This project is something greater than I ever could have imagined it. Erica and Ashlee's work made this into something incredible," she said.
And to add to her excitement, readers at The Kindle Hub voted her book as the Best Children's Book of 2014.
"It was thrilling the response from people," she said.

Charmain Zimmerman Brackett started her writing career while still in college joining the sports staff of the local paper as a correspondent taking high school sports stats. She's continued working for that same newspaper for more than 27 years. She published her first novel, The Key of Elyon, in 2012, and it was awarded the 2014 Yerby Award for Fiction at the Augusta Literary Festival.

Thanks to our wonderful parade authors we've got fantastic swag baskets for three awesome winners! Prizes include ebooks, gift cards and fun!
Remember, winning is as easy as visiting, clicking or commenting--easy to enter; easy to win!
Click here to enter