A to Z Canal du Midi and IWSG April

The Canal Du Midi runs from the Mediterranean to where it joins the Garonne River, then flows to Bordeaux on the Atlantic coast and is 240 km (149 miles) long. Before its construction (from 1666 to 1681), goods were either carried overland or ships sailed around the Spanish peninsula, through the Gibraltar Pass and then up the coast to deliver cargo. It was a world wonder, a marvel in its time, and still is today. Though it isn’t used for cargo anymore, unless you count humans, it is kept up as a UNESCO World Heritage Site, and is used especially in the summer months for tourists and sailors alike. 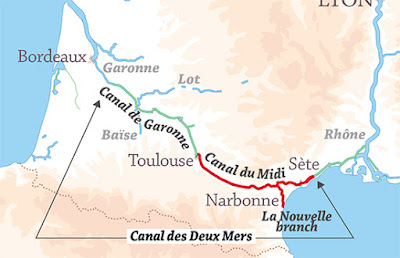 If one followed the Canal from its beginning to its end, one could spend days or weeks and really come to appreciate the southwestern part of France. I did this years ago on a bike. I rode the tow paths, stayed in youth hostels and hitched a ride on one of the few remaining cargo “péniches” barges at the time. I even met my husband aboard his father’s péniche, Stella, on a connecting canal in Toulouse, the Canal Lateral. Ah, reminiscing… But I’ve seen it many times since; walking and picnicking on its banks with our children, eating in its restaurant barges, even last year we followed it for a while by car, taking in the Malpas Tunnel, Les Neuf Écluses de Fonseranes, and visiting a friend’s vineyard (See D tomorrow!) on its banks.


Today the Canal du Midi is getting attention it doesn’t want as the large picturesque “plantane” trees (Sycamores) that line much of its length are dying and being cut down. They’ve discovered that part, if not all, of the cause is from WW II ammunition boxes dumped in the canal during and after the war that poisoned the water for the trees. Now, thousands of dollars are being spent to replant the dying trees, so that the look of the canal can continue to entrance those of us who love this enduring legacy.
Not all the trees are gone, and so this world wonder still bewitches not only those who know and love it, but also those who choose to learn about this region either by barge, bike or on foot.

Last two images from:
xeniaboatlog
freewheelingfrance
All other photos by Buie-Collard
AND NOW TO IWSG FOR APRIL
This post will be sooo short, for obvious reasons. Just wanted to share that I will be ready in the next few weeks to send a readers copy of my current WIP out to my beta readers for their comments! I'm excited and anxious at the same time. But I'm happy to be at this stage in the novel's life, because this novel has taken me longer to write than any of my others.


The wonderful co-hosts for the April 3 posting of the IWSG are
J.H. Moncrieff, Natalie Aguirre, Patsy Collins, and Chemist Ken!
Please visit their blogs and thank them for co-hosting!