Have you every pondered over a scene, hoping it had that “believability” factor that we all know is necessary if we want to keep our readers engaged? Some days while working on a scene, I spend hours pondering, re-writing, trying something different, walking away, coming back and trying again. Some days the scene literally writes itself and with a bit of tweaking, stands on its own right away. I love those days! It doesn’t seem to matter what the scene is. What does matter is the importance of it being believable or at least written well enough that the reader’s disbelief can be “suspended” enough that they “buy” it without it pulling them out of the story. We, as writers, must be believable. We must create our scenes with the expressed purpose of carrying our readers into our worlds without ever letting them know they left their own. Here is part of a scene from “The Seventh Man”:

Celia usually felt protected in a crowd. No one really saw her amongst an anonymous mass of moving persons and she liked that. But today she felt nervous and not at all protected. London was huge and she loved it but she didn’t know it well enough to feel safe in it. There was more space in Atlanta. The strangers mulling around her, pushing, pulling, laughing and griping jangled her nerves. When police sirens started to wail farther down the street, coming closer, the noise only added to the chaos and her discomfort. She tried to turn to see what was happening but was blocked on all sides. She felt trapped by the crowd, propelled by the tide of humanity toward the metro station. At least she was going in the right direction.
She felt a body bump into her from behind but her bags tangled against her legs and she couldn’t move any faster. Before she could react, someone grabbed her, spun her around and put an arm around her, shoving her face into the middle of his chest before she could see his face.
Celia reacted instantly, pushed back against him with her elbows, protest on her lips. But before one word escaped, before her heart-beat aligned with her escalating panic, the stranger slipped his other hand beneath her open coat and pressed a sharp point against her back ribs. A knife. She knew immediately, with a loathsome intimacy, the feel of a knife and what damage it could do. She whispered her prayer, “Not again! Please God—” Then a bomb went off inside her head and she started to scream. 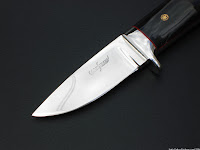 The man reacted, pulled her closer, his head next to hers, his breath hot against her ear as he said, “Be quiet. I can, and will, puncture your heart if you make one sound.”
The knife pressed harder, silenced her; reinforced his threat. She started to hyperventilate. Police sirens beat the air. She heard patrol cars screeching on suddenly overworked brakes, congesting the traffic in front of the store, and then the sound of cops yelling and the rhythm of running feet on the pavement. The police plunged through the crowds, rummaging like rabid shoppers looking for a good deal. “Bloody hell,” the stranger cursed and tightened his grip on her. He blocked out any thought she had except one. Life or death. ©2012

Images from:
www.knifemakersdatabase.com
uk.reuters.com
Posted by Lisa at 12:30 AM