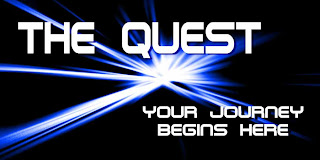 I thought to write this post about questions, but instead Quest came to me and said, no, it’s about the quest. And so it is. We as writers are on a quest, for whatever reasons, to write, to publish and to live forever within our words. At least that is how I feel about it. Whether I “publish” or not, my words are still here, on paper or internet , outside of me. I will not take them to my grave. They will live on.
The other quest, sometimes known as the “call to action,” that we as writers participate in, is the quest our protagonists will take on in their own lives/stories. No story/novel/short story is complete without a quest of some sort. During this quest the protagonist will learn much about himself (we hope) and what he can and can’t do. Sometimes the protagonist is a “tragic” hero in that there really is no good outcome for him, but he might still find redemption. I will write more about this idea on the letter “S” day.

Meanwhile, here is an example of the beginning of the quest, or call to action, for OFP (Our Favorite Policeman).
Detective Sergeant Alban Thain of the London Metropolitan Police Service reached for the phone before it rang twice. “DS Thain.”
“Thain, are you the only detective there?” Detective Chief Inspector North’s shout almost took out Thain’s eardrum.
“No sir. Patterson’s here as well.”
“The two of you get over to the Royal Bank of Scotland right now.”
“Sir, the Flying Squad for the robbery is already on that one—”
“There’s been a murder, Thain, in the same damn bank. DS Bell will meet you there.”
Thain reached for his jacket hanging on the back of his chair. “We’re on our way, sir.” He didn’t bother with a goodbye as he shouted, “Clive, come on. There’s been a murder at the Royal Bank of Scotland.” Veering around the corner of his desk and into the hall, he almost ran over Clive Patterson, also a Detective Sergeant, who barreled down upon him pulling on his own jacket. “North assigned it to us?”
Thain nodded as they took the stairs down two at a time to the ground floor. “And Rae Bell.”
“Sometimes catching up on paperwork is a good thing,” Clive remarked.
“Sometimes, like now,” Thain agreed.
©2011

Look at this photo, what quest is this little girl on?