Mark Lenzi, Olympic Gold (Barcelona 1992) and Bronze (Atlanta 1996) diver was a wrestler in high school. Then he saw an Olympic diving event (Greg Louganis winning the gold in 1984) and it literally changed his life. He quit wrestling and took up diving. Within six years of his doing so, he won a gold at the Olympics in Spain.
What does he have to do with submission? Have you seen this photograph? 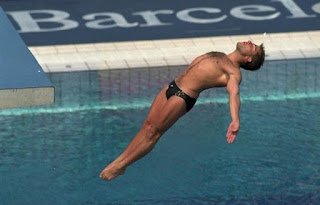 This is the epitome of “a picture is worth a thousand words” to me. I saw this photo, heard of this man for the first time April 10th 2012. He'd died on the 9th at age 43. I saw the photo and had to read about him. It isn’t so much his life story that caught my attention, though it was a great story, a “Cinderella story” so it’s been dubbed, it was more the photograph that caught forever the submission of Mark Lenzi’s entire body and soul to his art.
One only has to see the perfected honing of his body in/for his art at that particular instant in time; the fact that his eyes are closed, his entire being is engaged in what he has chosen to do not only with his life, but with his “non-typical” diver’s body. I couldn’t look away from that power and submission.
I had no idea who he was when I saw the photo. I only knew what I saw with my eyes, then my heart. I cried when I found he had died at such an achingly young age.
Maybe his time on this earth was to be short because he’d already accomplished what he needed to. I don’t know. I only know the inspiration he gave me in that one instant; the one instant he took years to provide to all of us who will remember him.
As a writer I hope I can achieve this complete and total submission to my craft. I know I haven’t yet. I dream and work and strive for it. I look at his face, his eyes closed in the midst of monumental stress, and I am inspired. Thank you Mark Lenzi. You are remembered. 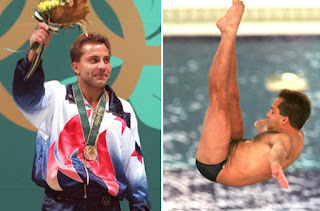