Yves Duclos, Marechal Ferrant
Do you think about donkeys at all? Did you know they need “shoes” too? My husband has a friend, Yves, that he’s known since they were in high school together who is a Farrier who specializes in taking care of donkeys in France, Morocco, and Spain.
We saw him last year and learned much about what he does. I had no idea he’d become so important, but, as here in the States, a lot of farmers and people with livestock use donkeys to protect their animals. Donkeys are natural protectors. They will attack and fight off coyotes, wolves, bears and other predators very effectively. And in places like Morocco, donkeys are more valuable and less expensive than cars and are used for transport, work on farms, and almost everything you can think of. So, donkeys are important and need to be cared for. Who knew?


Yves teaches others how to shoe donkeys and look after their health. He’s been doing this for over thirty years and traveled widely because of it. He is in high demand, especially since the “donkey protector” fever has set in. When I think back on it, almost everywhere I’ve gone walking, frequently I’ll pass a donkey here or there, even in the US. No matter the region. If there are livestock or farms, one can find donkeys. 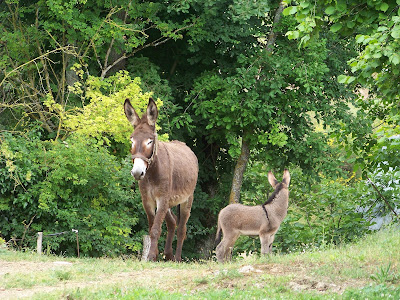 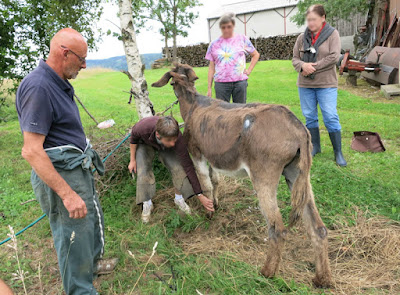 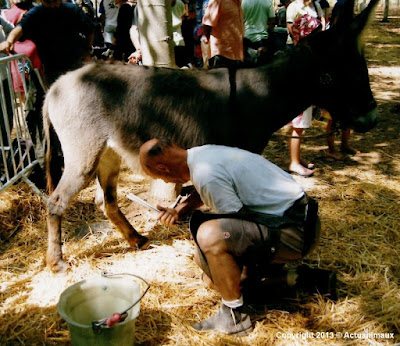 Click here for more information about donkey care in France


Photos by Buie-Collard and Ann Collard

Some images from:
http://old.actuanimaux.com/actualites/agenda/stage-de-marechalerie
http://www.assoadada.fr/stage-marechalerie-formation-tres-appreciee/
Posted by Lisa at 12:00 AM